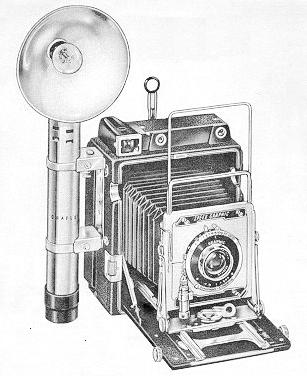 The Pacemaker Speed Graphic is identical to the Pacemaker Crown Graphic, but has a focal plane shutter, which provides access to barrel-mounted (shutterless) lenses, and offers the ability to track a moving object and give a noticeable ``lean'' effect. It reduces access to wide-angle lenses because of the clearance necessary for the shutter. 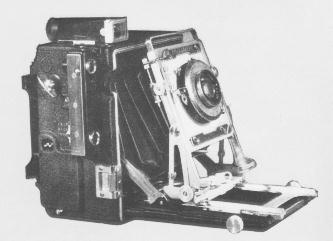 The Pacemaker series cameras have rangefinders as standard features. In 1947-1955 models (left), the rangefinder is mounted on the side, and is usually a Kalart, but occasionally a Hugo Meyer. For the Kalart models, an internal adjustment synchronises with almost any lens. For 4x5" models only a model change in 1955 (top of page) replaced the Kalart rangefinder with an integral Graflex rangefinder, mounted on the top on 4x5" Graphics. The later Top Rangefinder version of the Pacemaker takes interchangable cams.

Most Pacemakers have the Graflok back, where the focusing panel is both spring loaded and removable. The body release is switchable, and works both front and rear shutters. The front standard has tilt back, shift and rise. The bed drops.

The Speed Graphic has sufficient extension to focus the 15" (380mm) Tele-Optar to about 6-8 feet, sufficient for portraiture. The extension limit is not in bellows draw, but rather the limit imposed by the thickness of the chassis. The Speed Graphic is relatively thick: it will not focus a 47mm lens to infinity, though it can focus a 65mm to infinity. The Crown Graphic can accomodate shorter lenses because it lacks the rear-curtain shutter. There were recessed lensboard the earlier Anniversary models, but apparently none for the Pacemaker.

The Pacemaker Speed Graphic has the following controls:


It is difficult to figure out how to open a Speed Graphic when it is closed. There is a button mounted under the leather on the right side near the top. It is visible as a bump. Depress this bump and pull the focus bed (i.e., the front, when the camera is closed) down until the bed braces lock into position.


A flip-up lensless eyepiece mounted at the top rear center of the camera back. The user places his or her eye close to the sight, and looks through it and the front finder frame. In 1955 and later 4x5" models, parallax correction is accomplished by moving the peep site up and down.
The front finder frame is mounted to lens front standard. It is U-shaped, with 90-degree corners. It has two parts, one telescoping inside the other, and both telescoping into the front standard. When not in use, it slides mostly into the front standard. When it use, one of the components is pulled all the way up, and the other is adjusted up or down for parallax correction, as marked in stamped numbers on the sides.

The frame must be pushed all the way in before the focus bed is racked in. It cannot be used with certain wide-angle lenses, below about 90mm, because the frame will run into the camera body.

In 2x3", 3x4", and pre-1955 4x5" models, parallax correction is accomplished by moving the telescoping inner part of the front finder frame up and down.


The optical view finder is rectangular on the Pacemaker series, as opposed to tubular on some previous models. It has interchangable masks over its front element, for different lenses and formats. Some retailers still sell these masks. The eyepiece portion rotates to move up and down slightly for parallax correction.

Shown to the right is a later model Speed Graphic with the integral Graphic Rangefinder. The Kalart Range Finder is mounted on the right side in the early Pacemakers. Sometimes there is a flash holder bracket on the rangefinder.
Below the Kalart range finder is a wide stepped lever which actives one of two shutters: the lens shutter or the rear curtain shutter. Which shutter it operates is controlled by a vertical slide switch just behind the release. For the front (lens) shutter, it is connected by a cable to a lever arm which activates the shutter release on the lens, if the lens has a shutter.
The Rear Curtain Shutter Speed Selector is in two parts: a wing-nut winder knob which winds up the cloth on a roll, and positions one of several windows, and a tension lever, which selects either high-tension (fast) or low-tension (slow).

The loosest wind of the cloth is a closed shutter (marked ``0'' in the window), and next is a fully-open shutter (marked ``T'' in the window). The remaining cloth positions each provide two shutter speeds, depending on the position of the tension arm. Always store your Speed Graphic with the tension arm in the slower-speed position, and with the curtain in the T position.

When using the optical view finder or the peep sight (for example, with roll film) take care not to accidently trigger the rear curtain shutter into the "0" position, as you will get no exposure. If you are using the ground glass for focusing, you won't have this problem.


Folding infinity stops were introduced in the Pacemaker series.  The stop is screwed onto the bed rail at the point where the lens is focused at infinity according to the rangefinder (if calibrated for that lens, or in post-1955 models when the cam is installed), or according to the focus scale, if one is attached, or simply at the lens focal length distance from the film plane (for most non-telephoto lenses).  The infinity stop can be folded down to all the lens standard to be moved back behind or in front of the stop, to allow for a different infinity position for a longer or shorter lens, or to allow extra bellows extension for close-up work.

The lens standard can tilt up to 20 degrees, and can shift up about 19 mm. The carriage also can shift from side to side about 8 mm in either direction, but cannot (but see below).

The rail bed normally opens square with the camera body, but you can "drop" the bed below perpendicular by an angle of 20 degrees. Because the lens standard can tilt up the same angle as the tilt down of the dropped bed, the lens can be brought back to parallel with the film plane, and the shift up is just enough to raise the lens back to the central axis of the camera for a 100 mm lens or less, hence any wide angle lens (shorter than 100 mm) can be put back to front and center when the bed is dropped to get it out of the field of view.

The use of the tilt and shift doesn't stop just with accomodating wide-angle lenses. Bed-drop, tilt up, and shift can be combined in clever ways to use the Pacemaker like a view camera: